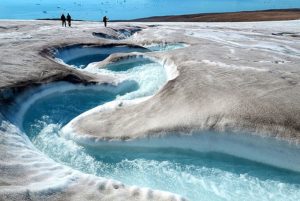 The average temperature of the Earth as a whole is not stable but varies with time, as evidenced by analysis of geological layers. For example our planet was ten degrees colder 20,000 years ago, during the height of the last ice age.

These variations are still very slow, and the temperature has fluctuated by only 0.2 degrees between the year one thousand and the late nineteenth century.

The fact that worries the international community at present is the acceleration of the phenomenon, which now occurs at a rate unmatched in the past. Thus, since the late nineteenth century, a hundred years ago, the average global temperature rose 0.6 degrees.

Worse, the computer simulations suggest that warming will accelerate and the average temperature could therefore increase by 1.4 to 5.8 degrees by the end of the century. It is this unlucky phenomenon that is called global warming.

Temperature variations of the atmosphere are usually linked to factors such as fluctuations in solar activity or speed of rotation of the Earth. But most scientists believe that the main cause of the current warming of the planet is a different phenomenon called the greenhouse effect. It is a process by which a large part of the Sun’s energy reaching Earth is stored by the atmosphere of our planet, rather than reflected back into space.

As we have seen, according to Wien’s law, the nature of the radiation emitted by a body depends on its temperature. The Sun, with a surface temperature of 6000 degrees emits mainly in the visible and energy passes easily through our atmosphere. But as the Earth’s temperature is much lower than that of the Sun, the Earth re-emits this energy as infrared radiation. However, certain gases in the atmosphere as carbon dioxide, methane and nitrous oxide, although transparent to visible light, are opaque to infrared light. So they block the re-radiation, absorb its energy and thereby heat up. Much of the solar energy is absorbed by the atmosphere, a phenomenon that is also found on the planet Venus.

The most likely cause of the acceleration of the greenhouse effect and global warming since the late nineteenth century is the impact of humans playing on the environment. Huge amounts of greenhouse gases are indeed released into the atmosphere by various modern activities such as fossil fuel use in industry and transport, and agricultural practices such as deforestation and farming cattle. For example, it is estimated that the concentration of carbon dioxide in the atmosphere has increased 30 percent since the beginning of the industrial age, which contributes significantly to the greenhouse effect.

The effects of global warming already being seen with, for example, the withdrawal of some glaciers, rising of sea level by thermal expansion of water as well as reduction in thickness of the polar cap Arctic. The acceleration of the phenomenon in the twenty-first century should lead to stronger effects, especially a sharper increase in the mean sea level and extreme changes in weather, with powerful heat waves and periods of heavy game rainfall.

The effects will induce great human suffering with more floods, more droughts, problems of water supply, development of diseases like malaria, the disappearance of certain coastal areas or low altitude islands. In the longer term, we can worry about such phenomena as the melting of the ice sheet covering Greenland, which would result in a 6 meters rise of sea level, with the disappearance of most coastal regions of the world. We should not count on luck for the game of global warming effect to reverse, but only hard work for the current and future generations can make it happen.